If you think it’s impossible to maintain a degree of subtlety while shooting daggers at someone, check out Stephen McKinley Henderson’s opening moments in Between Riverside and Crazy. The object of his annoyance is Victor Almanzar, noisily cracking almonds across from him at the kitchen table. The play begins without a spoken word—just an Arctic glare that gets a laugh. And there are more laughs where that came from —a happy surprise for a play riddled with grim urban realities and a steady stream of profanities.

Second Stage has upgraded this Off-Broadway opus—a 2014 Pulitzer Prize winner by Stephen Adly Guirgis—and installed it in Broadway’s smallest theater, the Helen Hayes, through Feb. 12. “The theater helps,” Henderson insists, emphasizing its intimacy. “It’s the ideal Broadway house for this play. Second Stage was quite wise to get that.”

The story centers on Henderson’s character, Walter Washington, a retired cop whose wife has died, leaving him struggling to hold onto one of the last great rent-stabilized apartments on Riverside Drive. He allows an assortment of crazies who have various ties to his son to stay there—rent-free.

This revival is a reunion for six of the seven original cast members. “I’ve been in several terrific ensembles before—Jitney, for one—but I embrace this cast,” thrills Henderson. “To have been together once, then to part, and then to come back together again after seven or eight years—very rarely do you see a show that’s been able to pull a company back like that.”

The newcomer to the cast is also a newcomer to theater. Making his stage bow as Henderson’s son Junior is the rapper and actor Common, who already has two Grammys and an Oscar (for the song “Glory,” which he and John Legend wrote for Selma). Here he acquits himself well, gracing Junior with unexpected kindness, so an EGOT is not out of the question.


It bothers Henderson not a whit that Common gets the only entrance applause of the evening. “Having worked with Denzel Washington in Fences and come on stage with him, you know what it’s like to have to hold for a very, very long time before speaking,” he says. “I have nothing but respect and admiration and affection for Common. He comes to the work humbly.”

The play’s title is precisely where Walter Washington, finds himself. “Walter was a good cop, but his heart wasn’t in it,” says Henderson. “He’d forgive people things. He had empathy in places where it’d have paid him to be tougher. He’d been out of his son’s life a long time, so doing something positive with him finally is why he has these people in his home.”

Junior is fresh out of jail and already trafficking in stolen goods from the bedroom. His loony girlfriend, Lulu, claims to be in accounting school but may be a prostitute. And the aforementioned almond-cruncher, Oswoldo, is a backsliding drug addict given to skull-crunching.

Guests to the apartment bring in additional conflict. Walter’s old patrol partner and her ambitious police-lieutenant boyfriend want him to sign-off on a lawsuit he has filed against the police department. Eight years earlier, Walter was someplace he shouldn’t have been—in a late-night criminal lair—and was shot six times by a white cop. Recently widowed, Walter has been moping about in his wife’s old wheelchair, wondering how to settle the case and find a happy exit from Riverside Drive.

Between Riverside and Crazy seems to come across stronger and more urgent in its current revival. “I think the main thing is what the country’s been through since we did it,” Henderson notes. “Stephen was prescient in some of the things he brought up. When we were performing the show in 2014, that thing in Ferguson, Missouri, went down.”

That thing—the shooting of Michael Brown, an 18-year-old Black man, by a white cop, and the protests and unrest that followed—was one of the incidents that sparked that Black Lives Matter movement.

“I think maybe we were able to go a little deeper, the company and the cast,” Henderson says. “Our director, Austin Pendleton, sorta asked us to this time. Once the show won the Pulitzer, he was aware it was well worth mining for its literary value—not in terms of making it rarified or anything. It just didn’t need to have as much fireworks, so he did ask us to talk to each other—to really communicate with each other in certain sections, and, in other sections, he’d say, ‘Go on, play it and have fun.’”

Guirgis has built a shape-shifting mechanism into his characters. They all start out as one thing and wind up another thing. “This has to do not with trying to deceive the audience but to explore and reveal the complexity of all human beings,” Henderson points out. “Nobody’s all good or all bad. We’re all works in progress. You can see one side of a person first because he’s usually presenting his best side. Then, after you’ve been around him a while, you get to know him much better.”

Henderson confesses that he feels quite differently about his character now than he did originally. (He committed to the part—his largest ever on stage—when Guiris’ script was only 15 pages old.)

“This time,” he says, “I have more concern about what it was like for my son to be the son of a cop like me. Before, I was really focused more on being a widower and how it made me feel, having just lost my wife. But this time I am focused more on what a burden it can be for a young African-American man to have a policeman father in terms of him growing up. That was some of it, and then I have also lost a nephew to the streets and had to deal with the police department in terms of trying to find out who murdered my nephew. So I realized there’s a lot to do to make it clear that Black Lives Matter. Some cases get more attention than other cases—unless you’re really on it. And the sad thing is this also applies to medical care. If you have a loved one who’s in a facility, you gotta make sure you go and see about them because they can be easily just warehoused.”

The first time around, Off-Broadway, Henderson took home an Obie. Now, blessed by Broadway, a Tony is within his range and completely plausible with happy critical confetti like “stunning,” “titanic,” “magnificently human,” “deceptively natural,” “a perfect combination of rent and controlled.” It’s the valedictory performance, elegantly economical, of a seasoned character actor.

Henderson tends to dirt-kick such lavish complements. “I’ll tell you,” he tells you, “I’m just glad to have work—and glad to have work that is appreciated and being accepted as universally as this is.” 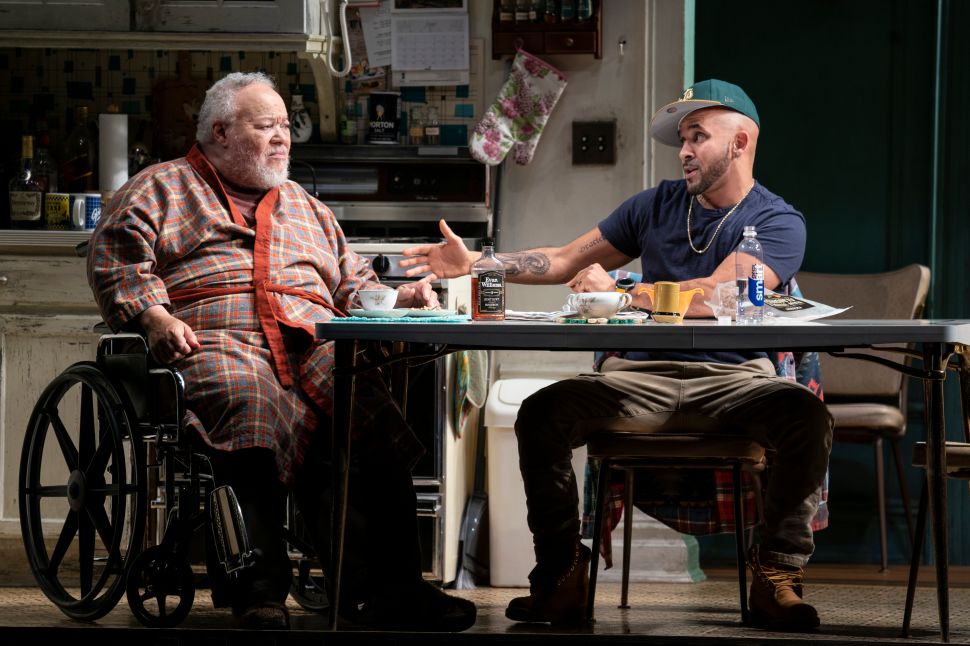