Some things cannot be denied, even at gunpoint. One of them is the power, awe and surprise inherent in Brendan Fraser’s genuine, realistic and heartbreaking performance in The Whale. The film isn’t equal to the standards he sets for himself in either Samuel D. Hunter’s phony, long-winded screenplay or Darren Aronofsky’s overwrought direction. That’s a shame because they both detract from the impact of the star’s center-ring passion and rob him of the applause he so richly deserves. I rarely care much for Aronofsky’s films because he doesn’t know the meaning of the word subtlety and his actors, who seem to adore him, suffer the consequences, and get unfairly blamed for his excesses in harmful ways. It happened to Mickey Rourke in The Wrestler, Hugh Jackman in The Fountain, Jennifer Lawrence in the abominable Mother! and everyone in Requiem for a Dream.

With luck and a considerable surfeit of skill, the same dismal fate might elude Brendan Fraser, but so many critics hate The Whale that the star has so far won zero accolades in the year-end awards sweepstakes. Prosthetics can be credited with some of the 600 pounds in this once svelte and sculpted actor’s onscreen weight gain, but viewers who believe his shocking transition is just another Hollywood gimmick are advised that in interviews he admits most of the weight incurred from emotional problems in his personal life is real. The camera does not lie and, determined to make a comeback, he is now obsessed with the task of overcoming actual obesity.  I wish him luck because I’d like to see him in more films.

Meanwhile, despite The Whale‘s many imperfections, I urge you to see the transformation of Brendan Fraser. He bravely plays Charlie, a gay professor who teaches creative writing online—weak, reclusive, manic-depressive, humongous and ashamed of what he’s done to his body after the death of his lover cost him his will to survive. After a heart attack incurred while masturbating and a diagnosis of congestive heart failure with a blood pressure of 238 over 134, he suddenly sees the writing on the wall and, fearing how it all will end, makes one last concerted effort to reunite with his resentful but caring ex-wife (Samantha Morton) and his long-estranged adolescent daughter (Sadie Sink), who only pretends to be interested in her father’s health after he promises to ghostwrite her school essays. This dubious pair, along with a long-suffering nurse (Hong Chau, also currently appearing onscreen as Ralph Fiennes’ homicidal maitre’d in The Menu) who wants Charlie hospitalized, and a young door-to-door evangelist (Ty Simpkins) are his only allies in this survival scenario, and the time they spend trying to cure him seems interminable.

The Whale has moments that touch the heart and passages that engage the mind, but the insufferable parallels it constantly draws between Charlie’s obesity and Moby Dick, Charlie’s favorite book, may have worked better in the stage play by Samuel D. Hunter than they do in his screen adaptation, where they merely ring false and drag the pace to a crawl. The rhythm (or lack of it) in Darren Aronofsky’s direction keeps slowing the movie down to a series of stops and starts. That pretty much leaves Brendan Fraser to make his own lemonade with more lemons than he can safely handle. Scenes abound with him wobbling around naked to the toilet and unable to get up from the seat, wolfing down candy bars and choking on buckets of fried chicken, followed by projectile vomiting that has nothing to do with acting. When I wasn’t  covering my eyes, I found myself listening to numbing dialogue about redemption that didn’t ring true. So I admire the effort and the relentless display of craft and courage that score high marks for Brendan Fraser in a film I’m glad I saw, but never want to see again. 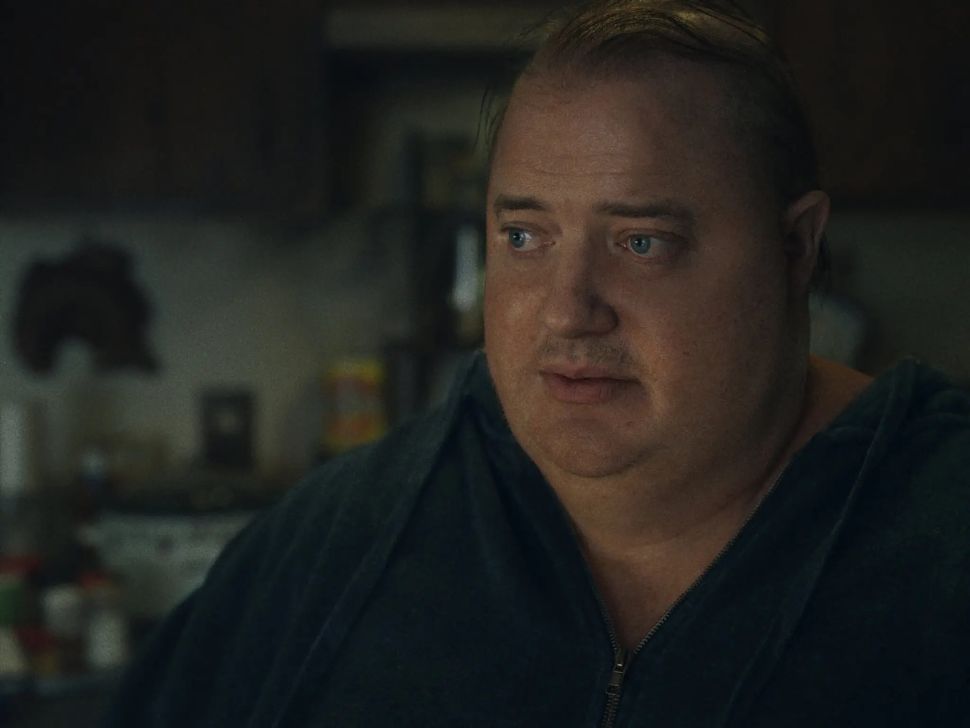