A proposed class action suit was filed in Los Angeles County Court on behalf of Iola Favell, Sue Zarnowski and Mariah Cummings, who were formerly online students at the Rossier School of Education at the University of Southern California (USC). It was brought forward by the National Student Legal Defense Network, an advocacy group for students, and also names 2U Inc., USC’s for-profit online education program partner, as a defendant.

The complaint alleges the university promoted the program using rankings that contained misleading data. “Both USC and 2U’s actions have hurt countless students who thought this data would help them make an informed enrollment decision,” said Eric Rothschild, litigation director at the National Student Legal Defense Network, in a statement. “Instead, they were lured into a manufactured profit-making scheme at the expense of their financial and educational futures.”

In March, USC announced it would be withdrawing its education school from the US News rankings after discovering it had been providing inaccurate data for the past five years. In response, US News said it would list the graduate school, which was previously among the top 20 U.S. education programs, as unranked for 2023, in addition to requiring university officials to provide a letter of accuracy for its data submissions in the next three ranking cycles.

A former dean purposefully omitted data from the online programs

A subsequent investigation of the Rossier School of Education, conducted by law firm Jones Day, found that the school’s former dean, Karen Symms Gallagher, since 2013 had instructed administrators to omit data from certain programs in its US News submissions to to raise the school’s ranking. The former dean also reportedly sent a 2016 email where she noted that “we will drop like a rock in the rankings” if online doctoral program data was submitted. USC never submitted any data from its online education programs to the US News rankings of education schools because the programs would have been ranked considerably lower than its in-person programs, the lawsuit alleges.

On Dec. 15, the school said it would no longer participate in the US News rankings going forward. “I’m doing this because the rankings’ methodology does not measure what our school values most: Advancing access, equity and diversity in education through research the work of our graduates,” said Pedro Noguera, the current Rossier School of Education dean, in a statement.

The lawsuit, however, claims, the school withdrew to prevent it from disclosing its true data, claims the lawsuit, “rather than accept the financial and reputation ruin that would follow from the submission of accurate data.” Arguing that online education students at USC were drawn in by the promotion of fraudulent rankings which didn’t even pertain to their program—the rankings were for the in-person programs, not the online classes—the suit also claims USC and 2U aggressively promoted these rankings to grow online enrollment.

2U, a Maryland-based company which provides technology platforms and recruiting services for the Rossier School of Education, allegedly told investors “any decline in the ranking of one of our clients’ programs or other impairment of their reputation, could have a disproportionate effect on our business,” reads the lawsuit, which said USC and 2U promoted the US News rankings through search strategies, online advertising campaigns and on the school’s online education program website, without disclosing that the rankings relied on fraudulent data from in-person programs.

2U received 60 percent of the online program revenue, while USC received 40 percent. “This arrangement may be illegal; under most circumstances, federal regulations prohibit institutions from compensating recruiters based on enrollment in recognition of the fraud that often occurs when financial motivations are introduced,” reads the complaint.

Lauren Bartlett, a spokesperson for USC, said the school has not yet reviewed the complaint. 2U did not respond to requests for comment from the Observer. 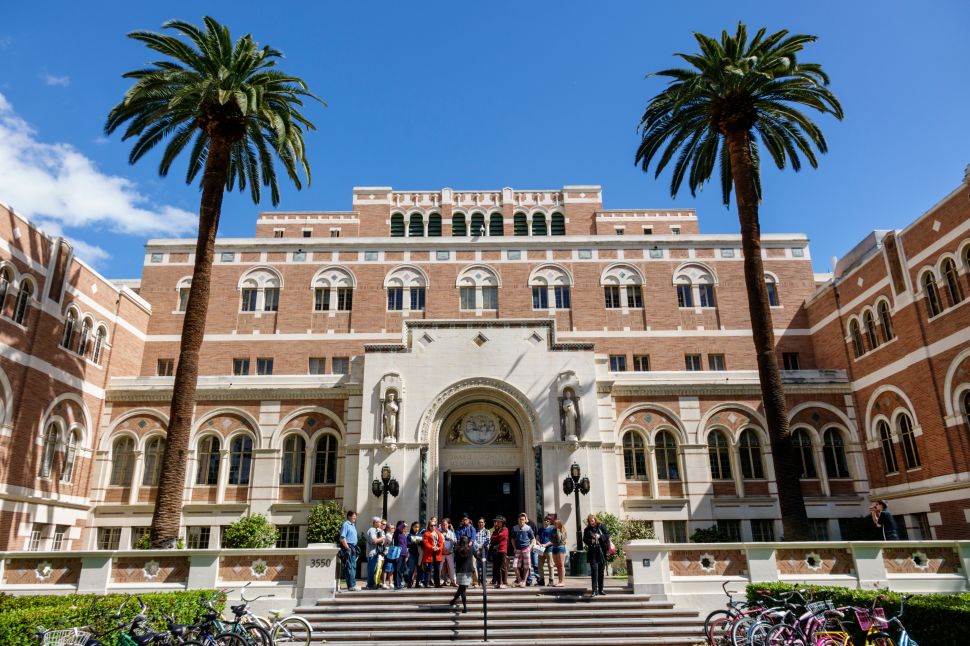