The success of a good romantic comedy relies on its protagonist. She—or he—has to be someone the audience really roots for. It takes an extremely likable actor to pull that off, so it’s not surprising that Zoey Deutch has shown a talent for the genre, as she revealed in 2018’s Set It Up. The actress, 28, is the daughter of Lea Thompson, but has proven herself as a charming star in her own right over the past decade. It’s no wonder that Reese Witherspoon tapped Deutch to star in and executive produce Something From Tiffany’s, a warm-hearted, holiday rom-com based on Melissa Hill’s novel of the same name.

The film, on Prime Video December 9, centers on Deutch’s character Rachel, a New York City baker whose boyfriend can’t quite get it together. Due to a mix-up of Tiffany’s boxes, Rachel becomes entangled with a widower named Ethan (Kendrick Sampson) and his adorable daughter. Fans of the genre can guess what happens from there, but it’s an amiable, sweet story that lets its characters be nice people. It’s Deutch’s third film of 2022 and it veers tonally away from her prior two — the period gangster movie The Outfit and the dark social media black satire Not Okay — which was a relief to the actress.

Here Deutch discusses her work in Something From Tiffany’s, why it’s important to her to be a producer and how she’s been inspired by Katharine Hepburn.

In 2022, you starred in three wildly different films. Was that by design?

It’s always been the most fulfilling for me to do different things after each other. It was not by design that these three came out when they did, or were made when they did. You never know. But I’m so grateful that I got to work on all these things. They were years in the making, for all of them. With [Something From Tiffany’s], the journey started four years ago, but we started really gearing up for it two years ago. With The Outfit, I met with [director] Graham [Moore] five years ago.

But I am very grateful that it happened the way that it did. It was so wonderful to shoot this movie right after I shot Not Okay because I felt pretty intense after finishing that movie. I know it’s funny and I know it’s a satire and I know actors love to be self-indulgent and talk about how tired they were after a shoot, but if I’m being honest, I felt really drained and emotional after it. This was so light-hearted and beautiful and feel good. Living in the character in Not Okay was pretty dark and then living in Rachel in Tiffany’s—she’s so positive and she’s so light. I definitely carried on into my personal and everyday life.

Not Okay doesn’t really leave you with the feeling that all is well in the world.

Yeah. I am so beyond proud of the movie and I’m obsessed with it. But I was just like, “Oh my God.” I finished Not Okay in September of last year and then I started shooting this in January. So I had a bit of a break. But I was in prep on this while I was making Not Okay. They were very different.

How did you come to be an executive producer on Something From Tiffany’s?

I was a producer on it before I was in it, actually. So I guess I’m one of the people that gave me a job, which is nice! I was approached by Reese Witherspoon and her company Hello Sunshine after she saw Set It Up. We had been trying to find something together for a while and they sent me this book. I thought it was beautiful and heartwarming and so charming and so we got to work on it. I know it sounds like I’m drinking the Kool Aid, but it really was such a gorgeous, special, beyond lovely experience from beginning to end.

So you suggested yourself for the role of Rachel?

Well, it was always going to be me. It was a project to produce alongside Hello Sunshine and for me to be in. But I’m open. I have a couple other projects with them. I’m open if they want to boot me! Whatever’s best for the movie.

Do you have a particular affinity for romantic comedies?

I think everybody loves them. So yes, I do. I have an affinity for maybe the ones that are less considered romantic comedies. Like Bringing Up Baby is one of my favorite movies. And Philadelphia Story. I am not a cinephile, but I love Katharine Hepburn. I like to preface that because when I say I love Katharine Hepburn people talk to me about great movies that I’ve never seen and I feel dumb. But I have seen most of her movies and I love every single one. That fast-talking, really smart, really witty, interesting, sharp and sometimes manic vibe is so inspiring to me.

But it depends on the movie. It’s like any genre. Horror movies get a really bad rap. There are some beyond brilliant psychological thriller horrors that are great. And then there’s the other side of the spectrum. It’s like anything in life. But [Something From Tiffany’s] is just a top-tier beautiful, classic, gorgeous rom-com that I’m very excited for the world to see.

What sort of preparation could you do to play Rachel? Did you learn to bake?

I was onboard for so long that I knew the character very well. And we had worked on the script so much to make these people feel real that we were all aligned. But I learned a little baking. I cook a lot — I love cooking — but baking is not my favorite. Like, “Oh God, I have to follow these things exactly the way it says!” With cooking I get to be chaotic and do whatever: taste it and put more salt and “What’s in the fridge?” It works better for my ADHD brain than “Let me follow the rules.”

Is that your approach to acting as well?

No, I’m very hyper-prepared. But I do like to feel it in the moment. Acting is reacting, but I’m really OCD about preparation and my script. And, yes, I know everybody’s lines. Every single one. Have you ever seen that video of Cole Sprouse on Friends and he tells Jennifer Aniston her line? That’s unfortunately me. I’m trying to keep my mouth shut. But I’m learning how to be less type A. I know that sounds contradictory to my thing about baking. But it’s okay. We’re all walking contradictions.

Was there something about Rachel you connected with personally?

The cooking and the ambition. But also I’m very loyal. Very, very loyal. And I can relate to the feeling of working on something and giving it your all even if it’s not going well. In her relationship I think she’s continuing to put in a lot of effort to try to make this work even though maybe somebody else would have jumped ship a long time ago. I can definitely relate to that in a good way and in a bad way. I really love to give relationships my all. With friendships and romantic relationships and with my family, I don’t give up. I’m very loyal.

And your character assets can also be character defects, you know. It’s about awareness. So I’m on that journey of awareness. I think it’s a lifelong one.

After you finished Something From Tiffany’s, what did you do with your newfound positivity?

Right after this I became a full-time wedding consultant, essentially. I officiated one of my best friend’s weddings, and I had to plan my best friend’s bachelorette. Then I was the maid of honor for my best friend in Italy. I spent two weeks there prepping. I fully quit acting for six months to be a full-time wedding assistant, which was funny to do right after this movie. I just couldn’t work. I couldn’t audition. I couldn’t do anything because I had such rigid dates that I just couldn’t miss. The famous thing is like, “If you want a job say you can’t work on these days and you’ll get a job.” And it literally happened that way. But I felt like sunshine.

You’ve been producing for a while now. What do you like about it?

As I said, I’m very detail-oriented. I love preparation. And I’m interested in everything and want to know everything. So it just felt like a natural progression from being somebody that likes to be that involved and has a lot of experience and a lot of great contacts and artists around me. The idea that I could create something with them and for them and alongside them and bring people in is just so exciting to me. I’ve been doing it now for six or seven, which is crazy. It’s fun. It happened quick, but I really enjoy it. I learned a lot on this one. I learned a lot from the team on how to be the kind of producer that I’d like to be.

What was the most important thing you learned?

In my opinion, the best producers are [of the mindset], “No task too big or too small.” I really saw that reflected in my fellow producers on the movie. One of the things that I really learned was it’s so important to give it 100 percent as a producer every single day until the day that you start shooting. And then you need to put that aside. That’s why it’s so important to work with great producers who can totally take everything under their wings.

I needed to completely shut it off and do my job, which was act. And then once it wrapped I went 100 percent back on. I’ve definitely I thought I could do both equally previously. I really learned as a result of being with people who gave me that space and that advice that this is something I need to focus on. 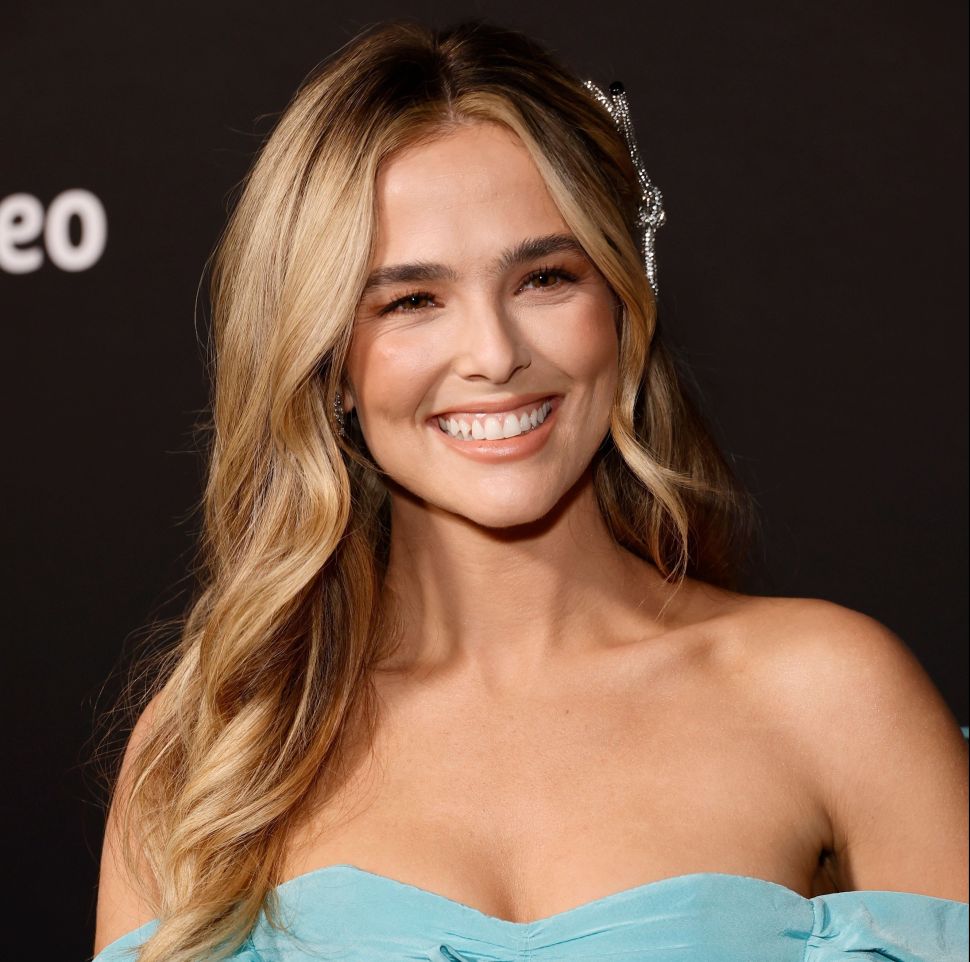