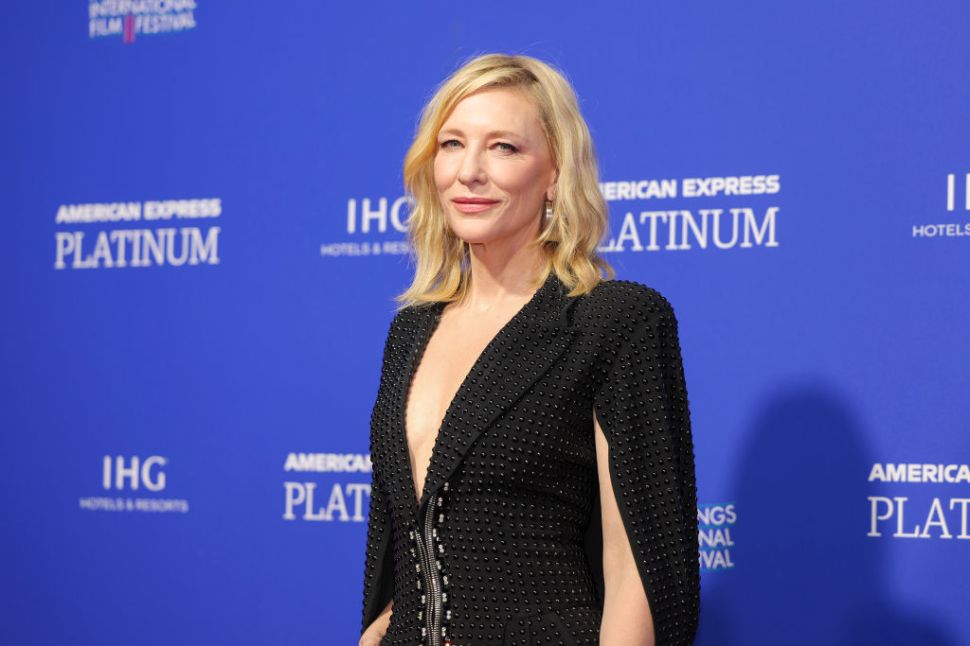 The Palm Springs International Film Festival kicked off last night with an awards ceremony, at which Cate Blanchett was among the recipients. The actress was presented with the Desert Palm Achievement Award for her much-discussed performance in Tar, and for the occasion, Blanchett reached deep into the Giorgio Armani fashion archives.

Blanchett is a longtime supporter of the designer, and is frequently spotted in ensembles by the fashion house—she also happens to be an ambassador for Armani Beauty. Instead of selecting a brand-new outfit for the event, Blanchett took a more sustainable route, and wore a glittering black jumpsuit from the Giorgio Armani Privé 2009 fall/winter couture collection.

The chic one-piece features all-over stud accents, with a blazer-style deep v-neckline. While the outfit is from over a decade ago, the cape-effect sleeves are both timeless and very on-trend for the current fashion moment. Blanchett, along with her stylist Elizabeth Stewart, accessorized the elegant look with a classic pair of black pointed-toe Jimmy Choo heels and Louis Vuitton earrings.

Blanchett’s decision to dig into the archives instead of wearing a whole new look is in keeping with her recent sustainable fashion efforts, including a re-wear of another Armani sequin jumpsuit (it seems an embellished one-piece is her style of choice right now, and we’re here for it) at the Camera Nazionale della Moda Italiana Sustainable Fashion Awards in Milan last September; she also wore the look at the Venice Film Festival earlier that month. While it’s just one step towards a more sustainably-focused and eco-friendly attitude in the fashion world, it definitely shows a move in the right direction.

Below, see all the best photos of Cate Blanchett’s vintage Armani Privé look at the Palm Springs International Film Festival.