John McCormack had a sunny, accessible disposition that made him ideally placed at the front door of INTAR Theater, welcoming patrons to plays—whether he had produced them or not.

Suddenly, cruelly—after only a few days away from the office—the Irishman serving as the unofficial greeter of one of the oldest Hispanic theater companies in the United States (as well as its longtime Executive Director) was gone forever. He died at 61 on May 18th, 2020, one of the theater world’s first casualties of COVID-19.

At the time, Eduardo Machado had shut off his phone to get some serious playwriting done, so when the bad news finally reached him it arrived in one big, heartbreaking clump. “I must have spent every day of my life with him for years,” he says of McCormack. “I knew him at Ensemble Studio Theater in the ‘80s. We did one-acts at 59e59. He was my executive producer all six years I was INTAR’s Artistic Director, and when Lou Moreno took over he worked for him until the day he died.”

That loss weighed heavily on Machado, but it felt strangely familiar to him, too. Sure enough, it unlocked a play that he had been trying to write for several decades. “It brought it all back to me, all the memories of friends I had lost to AIDS when I was in my 20s,” he says. “All my life, I’ve tried to write a play about it, but I’d get 20 pages into it and couldn’t get beyond that.”

Not About Me (and don’t you believe it!) is the result: a memory play world-premiering Jan. 18 at the Theater for the New City (TNC, at 115 First, between 9th and 10th), a venue not famous for slighting Machado’s works. It follows the journey of an openly gay playwright through parallel plagues when long-buried memories of friends lost to “that gay disease” surface and mix with the new COVID crowd and the rest of the world find out about a merciless plague.

Havana-born in 1953, Machado made it to these shores by age eight, along with some 14,000 other Cuban kids. The Catholic Church, fearing Castro’s Cuba would take children from their parents to indoctrinate them into communism, organized Operation Peter Pan, which from 1960 – 1962 brought children to the United States. Machado settled in Hialeah, FL with his cousins until his parents could emigrate to California.

It was there, at 17, that he entered the theater arts as a film actor. Three years later came his Screen Actors Guild card, but the medium didn’t enchant him, and he didn’t go far beyond some TV work.

But it was then, in the early ‘80s, that Machado developed a life-changing relationship with actress Estelle Omens, a member of the California chapter of Circle in the Square. “When we met, we became instantly best friends,” he says. “She wound up casting me in Los Angeles in Tennessee Williams’ Talk to Me Like the Rain and Let Me Listen. After rehearsal, she told me that she was dying of cancer and that she needed me. It was a long two-year lesson in how to be with people who are dying.”

Omens passed away in 1983. “Then, AIDS happened,” Machado continues. “I thank God every day that she had taught me how to deal with death. I don’t know what would have happened to me if she hadn’t taught me what I needed to know.”

Also in the early ‘80s, under the spell and tutelage of Maria Irene Fornes, Machado had taken a deep dive into playwriting. Now, he’s upward of 60 plays and a key supplier for regional theaters. Most—but not all—are autobiographical in nature or touch on Cuban life, then and now.

His career took a couple of significant loop-de-loops after that. He started directing plays (his and others) and, inevitably, took up teaching playwriting at Columbia, NYU and Sarah Lawrence.

“What I saw when I began teaching was that the worlds of Gordon Davidson and Joe Papp and Arvin Brown had disappeared into a world of industrial theater, let’s call it,” he notes. “The same thing happened at the universities I taught when I noticed how my teaching had changed. I would get into trouble if I taught the way I taught in 1990. I knew that I couldn’t do that.

“The minute I started teaching, I realized that the difference between me and Maria was that I knew you had to identify the character’s emotional needs. What Maria taught me: Just listen. I knew, because I was trained as an actor, I was always doing the other thing. You have to go for the archetype of the character. That’s what I’ve been teaching now on Zoom, and I feel much freer teaching now. I can go there with the students if they’re willing to go there. Not all are.”

Machado has also taught at the Mark Taper Forum in Los Angeles, and his bi-costal credits include writing four TV pilots. On the West Coast, that constitutes a stronghold, and he was upgraded to “Story Editor” simply because one of his playwriting classes there came up with the idea for a show: Hung, the HBO series that starred Thomas Jane as a well-endowed high-school coach who gives prostitution a spin.

“My students created it, and they wanted me involved in some way,” he says. “I was terrified of writing with a whole group of writers. But then I realized, ‘Well, you’ve taught groups of writers for 20 years. That was collaboration, and it was fun,’ so I agreed to be the series story editor.”

Not About Me is the 11th play Machado has launched at Theater for the New City, which “has produced my plays consistently since 1983,” and he’s taken over its directorial duties himself. “I didn’t want the play to become sexualized. What’s important about these people is their friendship.”

In a facsimile of the character who taught him about death and acting, Machado cast Crystal Field. Before she became the Queen Bee of Off-Off Broadway and the Artistic and Executive Director of Theater for the New City, Field was mentored in movies by the likes of Elia Kazan (Splendor in the Grass), Woody Allen (The Purple Rose of Cairo) and Todd Field (Little Children).

On Feb. 13, eight days after the run of Not About Me, something will be about Eduardo Machado. He, along with City Council member Carlina Rivera, will be honored with Theater for the New City’s 20th Annual Love ‘N Courage gala at The Players Club in Gramercy Park.

What, specifically, they are honoring him for, Machado confesses that he has “no idea,” but he is quietly confident that his career so far has given them plenty of multiple choices. 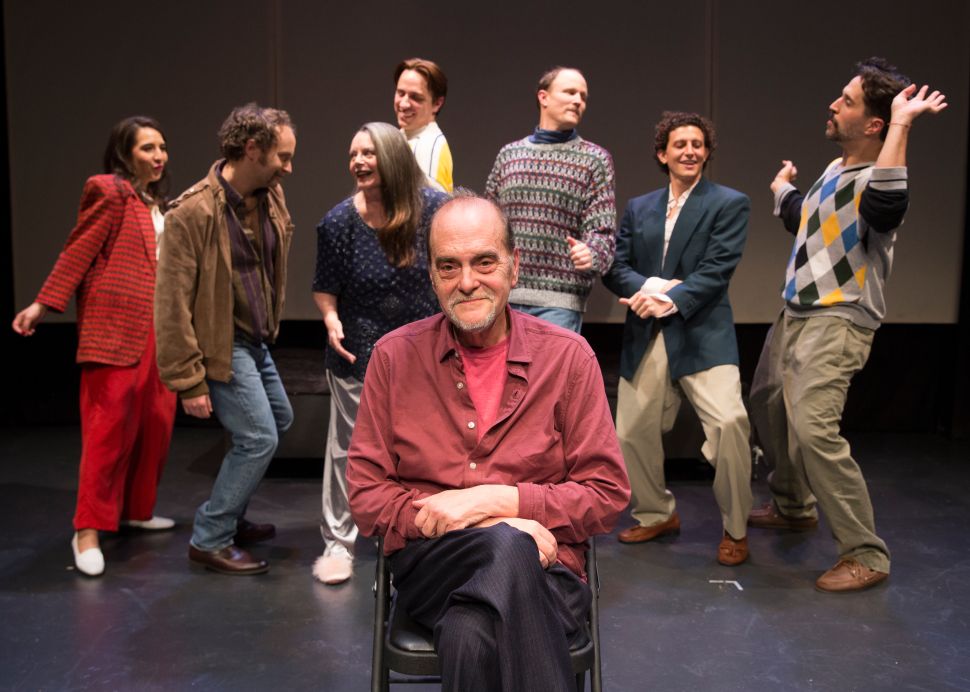 Filed Under: Arts, Theater, Eduardo Machado, Not About Me, Theater for the New City, John Mccormack, off broadway