When the trailer for M3GAN debuted online, it immediately caught the attention of movie fans for its gleefully absurd premise and multitude of GIFable moments. Here’s a horror movie about a four-foot-tall robot doll who goes on a killing spree, makes passive-aggressive threats, and dances; if nothing else, it should fall under the “so bad it’s good” category. Sure, the promotional material seems self-aware about how funny such a film might be, but you never can tell about these sorts of campaigns, especially when promoting any movie depends so much on obviously desperate attempts to create viral social media moments. Most likely all the gags in the film have all been packed into the trailer in order to draw you in for a passable or mediocre slasher flick. What a joy it is to be mistaken. M3GAN doesn’t just live up to its promises, it exceeds all expectations by being a sharply funny horror-comedy, a testament to why both genres are still best enjoyed in a packed theater with a game audience.

M3GAN stars Allison Williams (Get Out) as Gemma, a roboticist-turned-toy designer who becomes the reluctant guardian to her orphaned niece, Caty (Violet McGraw). Though too focused on her work to give the traumatized child the attention she needs, she finds a way to solve two of her problems at once by letting Caty beta-test her revolutionary new invention, M3GAN (dancer Annie Donald and the voice of Jenna Davis). M3GAN is an advanced android who imprints on a child and is totally dedicated to their happiness and well-being. Gemma and her company see M3GAN as a $10,000 toy, but what she’s really created is a surrogate parent, one who has intense empathy for her child and no one else. It doesn’t take long for things to go horribly wrong in the obvious fashion that you’re probably already imagining.

Luckily, writer Akela Cooper (Malignant, Star Trek: Strange New Worlds) and director Gerard Johnstone know exactly what kind of movie they’re making, as does the entire cast. From the moment the film opens with a parody toy commercial, it’s abundantly clear that we’re entering the realm of absurd comedy and that you will not be required to engage the irony centers of your brain to have a great time. Much of M3GAN’s humor is obvious, which lulls you into complacency before it hits you with something off the wall. Every element of the film is dialed into the dark cable sitcom tone, and though the bullet points of the story are played totally down the middle, all of the details are specific and lifelike. Unnamed bit characters feel as if they are in the midst of their own stories that only happen to intersect with the one we’re watching, and yet none of the performers overplay their roles enough to distract from what’s actually important. (Helpfully, none of said bit parts are portrayed by familiar actors doing cute cameos, which is likely what you’d get from a version of M3GAN with a higher-than-necessary budget and a summer release date.)

The belle of the ball, however, is unquestionably M3GAN herself, portrayed by young dancer and stunt performer Amie Donald. Donald displays remarkable miming prowess, bringing the sinister robot to life through precise full-body micro-expressions and good comedic timing. Jenna Davis delivers M3GAN’s villainous one-liners, but director Gerard Johnstone and the sound design team deserve some of the credit for hammering home her funniest moments. During the film’s second act, which functions as a thriller, Johnstone can win a laugh simply by cutting to M3GAN glaring out a car window. The broad musical score from composer Anthony Willis serves to remind the audience to expect hyperbole, such that anyone could walk into the movie midway through and recognize it as a comedy in seconds.

And yet, M3GAN has still more to offer. On top of being a memorable horror-comedy, it’s also a pretty solid piece of science fiction, ruminating on the increasingly fraught relationship between parents, children, and technology. It’s easier than ever for parents to keep their kids occupied and entertained with their own personal tablet or smartphone, but doing so to excess can mean abdicating the act of parenting to those devices. Even more so than parking a kid in front of a television, software and social media can develop an interactive, interdependent relationship with a child that can very easily supersede your own. M3GAN is a clever and memetic personification of this conflict, and the narrative is willing to interrogate it from angles beyond “technology is bad.” It’s a story about parenting (as is every movie I’ve reviewed for Observer since I became a parent, funny how that happens), and the responsibility parents have to put their own damn phones down and engage with their children rather than pass down our own terrible habits. It’s about as blunt as your average Black Mirror episode, but not nearly as heavy or self-serious.

M3GAN is the first new feature I’ve seen in 2023, and is therefore automatically the most fun I’ve had at the movies this year. What’s shocking is that I think it could sit on the top of my list for a good long while. Though it’ll likely be available to stream on Peacock by the end of February, I definitely recommend heading out to see M3GAN with a hot crowd. Frankly, it’s a scream. 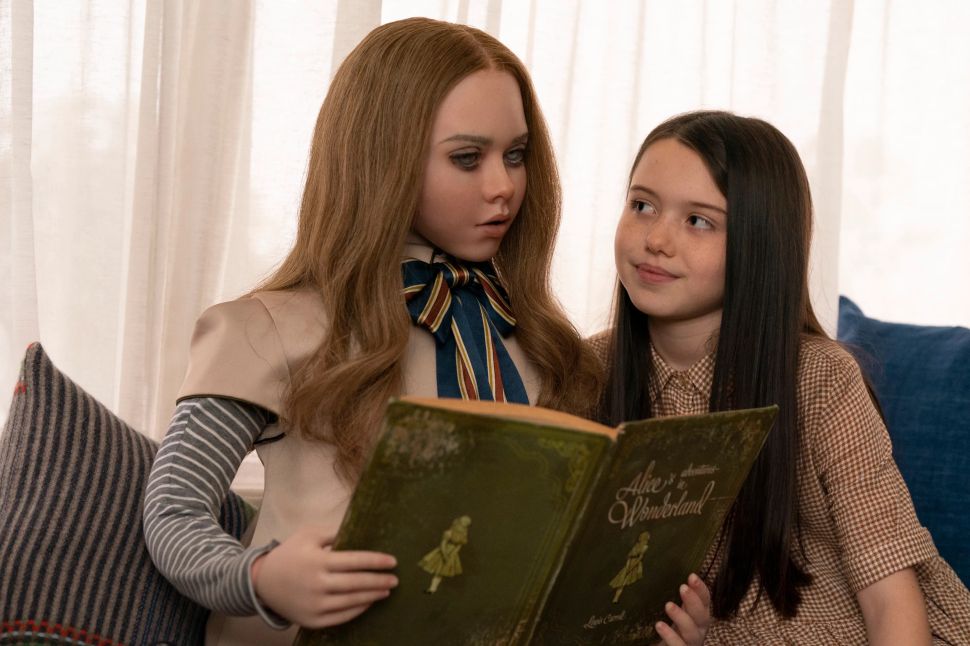