Gelsey Bell’s new experimental opera, “mɔɹnɪŋ [morning//mourning],” directed by Tara Ahmadinejad, tells the story of the extinction of the human race and the billion years of rewilding and species evolution that follow. Performed in a small 100-seat theater at HERE through January 22nd as part of the Prototype Festival, “mɔɹnɪŋ [morning//mourning],” is sung by five singers, Bell included, who perform a capella or play instruments on stage.

These instruments include the Celtic harp, handfuls of marbles swirled in a glass bowl, basic synthesizers, and a daxophone (a kind stringless cello that makes eerily human sounds through the friction created by a bow on wood). The performance is a clever patchwork of genres: improv and opera, choral folk singing and musical theater, spoken word and electronic noise music. Using whimsical light design, reminiscent of early arcade video games, the five singer instrumentalists—each with a highly individualistic performance style and tonal quality—blend their voices throughout a ninety-minute sound story that takes us to the literal end of the earth.

Creating sounds and theatrical experiences that have never existed before is a prerequisite for new music; however, what is winsome and refreshing about this work is its approachability. Bell and her collaborators seem to want to win over audiences with charm, humor, and good storytelling. The need to discipline audiences with difficult atonal sound or incoherent narrative, so prevalent in so much experimental music, is absent.

“mɔɹnɪŋ [morning//mourning]” is novelistic, linear, and fast-paced. It contains thrills and surprises. The audience laughs out loud. Storytelling, as a dramaturgical device and aesthetic framework, is at the heart of the piece. The work begins with a haunting choral sound, suggestive of Native American songscapes, as the singers gather around a collection of bowls and mark the end of our species, the act that commences the opera.

Gelsey Bell told the Observer that she was inspired by Alan Weisman’s 2008 book, The World Without Us, in composing the opera. This book details what would happen to the earth’s flora and fauna were humanity to suddenly disappear. Weisman looks at what the rewilding of the planet would look like as it gradually heals from millennia of human intervention.

Bell said her opera is a “celebration of a cleansing that the planet is capable of.” In Bell’s opera, Weisman’s tale is told in all its rich scientific detail—a melodic, anti-capitalist TED Talk. Much of the story is rendered in song, with important transitions spoken.  I found myself frustrated at times when the songs lacked crisp phrasing, rendering key factual components of the story inaudible. I had to remind myself that I was watching an opera of hard science fiction. As in the long, didactic novels of Kim Stanley Robinson, pleasure is to be found by letting the scientific information wash over you. There will be no quiz to follow. Fortunately, the opera’s abundant charm sands away at these moments of friction, and the audience is mainly held and nurtured in the dream space of the story.

Vast timescales structure the opera, starting in decades, moving to millennia and then millions and then billions of years. The time cycles are signified by increasing numbers of marbles poured into a bowl. Bell, alongside singer instrumentalists Aviva Jaye, Paul Pinto, Ashley Pérez Flanagan, and Justin Hicks tell this eons-long story like zany primary school science teachers hell bent on entertaining their classroom.

“The piece is very much an imagining of a possible future,” Bell said She spoke at length on the desire to express these vast time periods so that the audience develops an emotional relationship with the concept of a million or a billion years.

“There’s a political mentality of nothing can change, we’re stuck in this catastrophic climate crisis, we’re stuck in what our relationship to other animals are. There’s nothing we can do to really move that,” Bell said. She hopes that her work can open imaginations to other ways people can be in relation to time, nature, and other beings.

The creation of a meditative space for thinking about geological timescales seems like ripe territory for new music. Having established the logic of this dream space in the first portion of the opera, following hundreds of thousands of years of rewilding, nuclear meltdowns, and decomposing missile heads, the opera switches gears and moves from hard science to fantasy. After the Anthropocene has been and gone and the earth has had time to heal itself from the catastrophe of the human race (the remains of human civilization are repeatedly referred to as a rash upon the surface of the planet) we come to a new golden era. As human poisons are leached out of the soil and oceans, new species evolve. Most notably, the octopus, which comes to replace Homo sapiens as the dominant sentient lifeform.

Not until the performers transformed into singing space-traveling super intelligent octopi was I fully won over to “mɔɹnɪŋ [morning//mourning].” The ability to contain that much whimsy and seriousness in a single ninety-minute work is conceptually impressive and shows a willingness to wild out on the show’s material. The super intelligent octopi travel the solar system and colonizes Mars (sorry, Elon). They make first contact with aliens and transform our corner of the galaxy into a tourist destination for the viewing of solar eclipses.

This winsome act of strangeness is helpful in conceptualizing the opera’s vast planetary timescale. Bell and her collaborators arrive at their uncanny conclusion like aerialists smiling through gravity-defying feats. The opera ends with a triumphant flourish. With its Pac-Man-like light design, we view the planet’s last solar eclipse a billion years from now, just before the moon pulls away from the earth—an event witnessed by aliens from across the galaxy.

Species time has been on a lot of people’s minds since the pandemic brought the human race’s fragility and transience to the fore. “mɔɹnɪŋ [morning//mourning]” avoids hinting at eco pessimism or ecofascism through its deft manner of communicating its values. The performers are, after all, speaking to a human audience in 2023 that has no intention of lying down and dying to make room for the super-intelligent octopus. The expanses of time narrativized in the opera create an imaginative space for thinking about our relative place in the universe and our inseverable relationship with nature. Bell and her collaborators make clear that the earth will go on without us. How we learn to save our species from itself may well begin with such truly humbling perspectives on our planetary relevance. 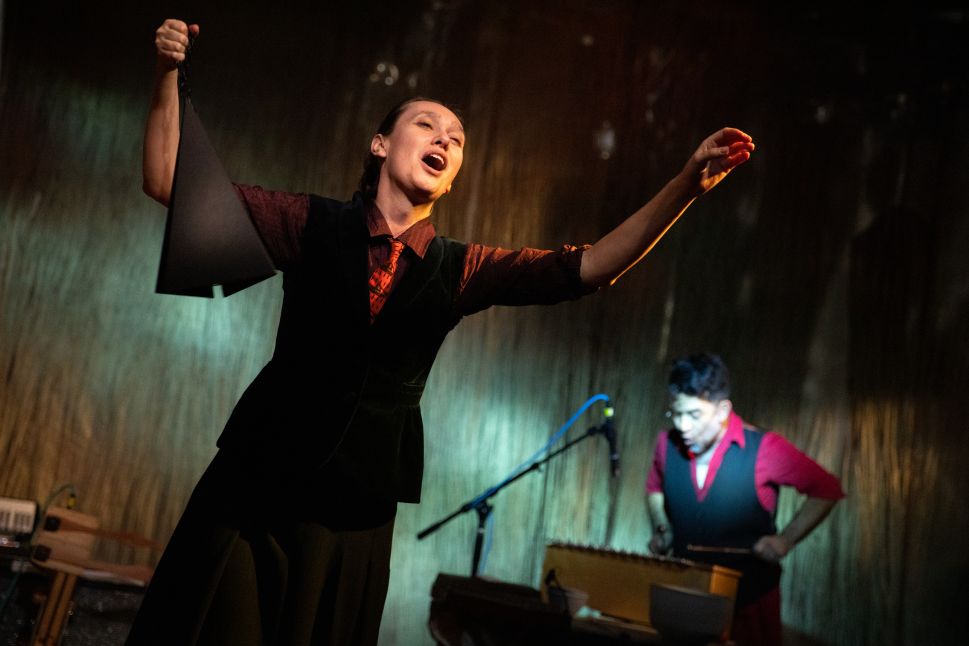