The Metropolitan Opera presented a star-studded cast of female voices in their revival of the now-classic John Dexter production of Dialogue des Carmélites on January 15.

Dexter’s staging, now nearing its fiftieth year in production, has barely aged; its visuals remain spare and striking: powerfully minimal as opposed to underdrawn and under-furnished. The iconic opening image of the nuns lying prostrate within a cross of light still elicits the odd gasp, here and there.

Under the unwaveringly cold lighting, the stage is often divided by screens or jail bars: walls which meaningfully divide while also retaining visibility, both visually transparent but functionally opaque. When they divide Blanche and her brother, they seem to represent his limited—but not entirely false—perception of her. They may see each other, but they cannot reach each other. I also read them as capturing something of the invisible but insurmountable gap between human understanding and divine mystery, between which faith is the sole, but imperfect, bridge. As these sets flew in today, I began to see them as suggestive of the guillotines that are heard offstage (but never seen) in the final scene of the opera, a testament to the continued interpretive possibilities of a well-conceived production and of a complex and powerful operatic text.

Carmélites is beloved not only for its music, which is by turns naturalistic, mystical, and dramatic, but also for its deep philosophical and religious exploration of the nature of fear and of devotion. I can’t think of another opera in the standard repertoire that presents such nuanced and individual portraits of five major female characters, let alone uses them to think through huge questions about faith: the human motivations that send us running towards and away from it, its purpose and power in an increasingly secular world, and the purpose of martyrdom as faith’s ultimate expression.

Poulenc is admiring but clear-eyed in his investigation while ensuring that his characters retaining individuality and humanity instead of lapsing in allegory. Characters doubt in distinct ways, each true to her own personality. It’s a true ensemble piece, in other words, and this cast was very well suited to one another as well as to the music. Each singer was both vocally and dramatically distinct, heightening the realism of Poulenc’s characterizations and working together to make these martyrs feel human and fallible, even in their bravery.

As the central Blanche de la Force, Ailyn Pérez was vocally capable, but dramatically uneven. In this performance, Blanche’s timidity felt more paranoid and jumpier, her reactions outsized and somewhat delayed. There were some peals of laughter when she dropped the Christ-child figurine, the intended foreboding derailed into slapstick. Though vocally strong in the first act, especially in the scenes with Madame de Croissy and her brief duet with Constance, by the second half she oscillated between a nearly inaudible whisper pianissimo or a near-shout.

She did, however, capture well Blanche’s simultaneous desire to escape and craft an identity away from her father and brother (and the frightening world that she misunderstands and misunderstands her) and for an abdication of that very same self-determination through the obedience required by the Carmelites. It is the great irony of Blanche’s psychological journey (and testament to the complexity of Poulenc’s libretto) that her final moment of self-determination is also self-annihilation. Blanche’s ending, when she joins her sisters in martyrdom, is undoubtedly heroic and brave—and was correctly played as such— but it’s also complicated by the preceding scene between the sacristan and Mére Marie, who is devastated when reminded that chasing martyrdom is a subversion of God’s will.

Surrounding Blanche are a collection of women who struggle in different but equally powerful ways with disentangling the threads of their own desires and fears with the will of God as they react and interpret the world around them.

Mezzo-soprano Alice Coote, as Mother Superior Madame de Croissy, thrummed with a dark intensity from the moment she came on stage. Her face and body contorted, wracked with discomfort that rose to agony, this was an utterly vanity-free acting showcase for Coote, matched by an intense and riveting vocal performance that was unafraid to dig into the nastier side of de Croissy. I found her intensely moving in her anger and pain.

Sabine Devieihle, making her Met debut, was luminous as Constance, resident convent chatterbox and Blanche’s constant foil. Her voice has a pure, sweet quality that disguises a wealth of power and presence and which made the flighty young nun more grounded and even more likable than usual. As she searched for Blanche while ascending the scaffold, Devieihle’s Constance seemed to shrink into herself, glancing around in what constitutes her own test of faith, before expanding in a burst of joy as Blanch runs in.

Another vocal standout in an evening of overall very strong singing, was Christine Goerke as Madame Lidoine, Mother Superior after Madame de Croissy. This performance was a convincing argument for giving Goerke slightly lighter repertoire than the Met has given her recently; freed from the chains of something like Turandot, which she sings with immense power but not always with beauty, the soprano was able to release a plush and generous stream of sound that flowed with unhurried strength, more a waterfall than a muscle car. She also looked radiantly beautiful, exuding calm and warmth with her eyes glowing from beneath her habit.

Jamie Barton turned in a finely-drawn and affective performance as Mére Marie, whom she leant a stentorian strength and zealous fire, cut with a hint of instability and fear. Her fervent and somewhat disturbing desire for martyrdom, her barely concealed jealousy of Madame Lidoine after being passed over for the role of Mother Superior, along with the tension between her vow of obedience in watching over Blanche and her reluctance to deal with the younger woman’s fits of nerves, all combined with Barton’s expansive and steely voice made Marie a fascinating character indeed. Her moving scene with the priest revealed a stunning combination of love, devotion, and envy.

There are a few men in the opera as well, with newcomer Piotr Buszewski and veteran Laurent Naouri as the Chevalier and Marquis de la Force, respectively. Both were hemmed in by the talkiness of their opening scene, which doesn’t allow for much lyrical singing, but Naouri wrenched as much expression as he could with his flinty baritone. Buszewski shone brighter in his scene with Blanche at the convent, finally able to slow down and reveal a pliant and robust tenor.

At the podium, de Billy was at his most incisive when steering the fast-paced moments, which hummed with realistic dramatic tension. At times, however, these scenes flew by too quickly for there to be much beauty from the singers, who had to manage huge mouthfuls of text. Poulenc’s score, which can be both dense and exposed at once, presented some volume challenges throughout, with de Billy sometimes unable to make his singers heard over the orchestra. In the final scene, de Billy held onto the reins more firmly, letting Poulenc’s powerful conceit speak for itself as each nun’s “Salve Regina” is silenced with the guillotine, one by one. 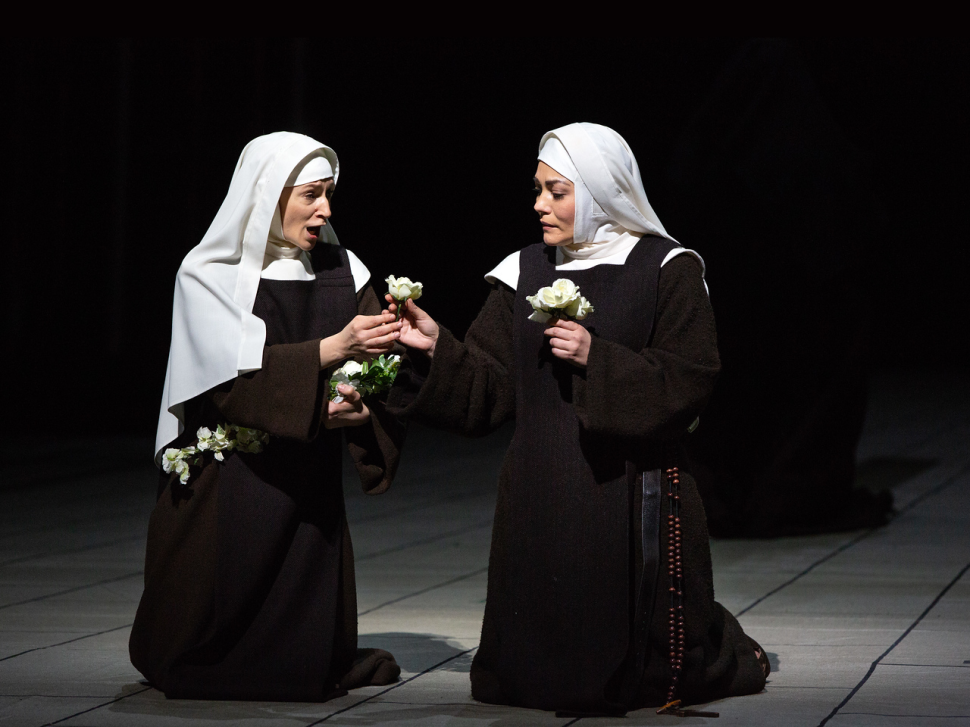