What if God was manager at an Applebee’s in North Carolina?

What if Adam was a dead ringer for Bob Seger?

These probably weren’t the questions writer-director Richard Maxwell started with as he developed Field of Mars, but they haunted me upon leaving the cryptic yet transfixing collage of fragments on subjects that ranged from meaning of rock lyrics to the rise of bipedalism.

For nigh on 30 years, downtown auteur Maxwell has hewed to a tactic of rigorous minimalism—design stripped down like a rehearsal room, acting deemphasized to the point of amateurish deadpan. At the same time, his storytelling has grown much more abstract and absurdist. (I briefly traced that journey when his previous show opened at the Kitchen pre-pandemic.) In 1997 at HERE, Maxwell presented a workplace comedy called Burger King about a fast-food manager with employee issues. A generation later, he’s moved on to Applebee’s and the story of Genesis.

Field of Mars (through January 29) is one of the longer runs in this year’s Under the Radar, the annual tasting menu of global, experimental work that fills the Public Theater and partner venues every January. Judging by the six shows I caught, the exorcism of myth and history is an artistic priority. There was a highly personal meditation on genocidal Belgian colonizer King Leopold II; an overlay of Greek tragedy on the American West; riffs (which I missed) on Melville’s Moby-Dick, the Epic of Gilgamesh, and the torments of Anne Frank’s father. Deep cuts in humanity’s troubled past and collective unconscious. (Not so deep was the Extremely Online screed about Kylie Jenner, the less said about which the better.)

For all this assiduous plumbing and unclogging of the past, none of the offerings included a dumb show in which two pairs of neanderthal brothers and sisters engage in a marathon of intercourse and battle, fornicating in every possible combination between homicides, as a narrator dispassionately drones, “Other Brother fucks Sister. Sister fucks Other Brother. Brother and Other Brother fight…” Guess that at the Dawn of Man there wasn’t much else to do.

The extended orgy-dance—played perfunctorily like a kindergarten reenactment—is one of the more remarkable sequences in Field of Mars. Overall, the piece is a lengthy, rangy collage often as inscrutable as its title (which refers to civic grounds reserved for military marches), segueing from Biblical to modern and anthropological perspectives, as it obeys a dream logic in which the goal (I think) is to figure out where we came from and where we’re going.

After a prologue in which narrator Tory Vazquez uses an app on her smartphone to assign the color of random items (candy bar wrapper, surgical mask) to obscure pigments and their histories, the space transforms without much ado into the Garden of Eden. Designer Sascha van Riel’s purposely drab unit set is a modular mass of taupe and burnt caramel. Playing God, Phil Moore enters in black trench coat (Kaye Voyce costumes the actors in quotidian fashion). How do we know Moore’s the Supreme Being? He yanks a rib from the side of an Adamic figure, the burly, hirsute Brian Mendes, as the latter dozes. Soon, Eve (Gillian Walsh) joins Adam and they writhe together on the floor. Exit our Edenic couple and the space becomes an Applebee’s in Chapel Hill, North Carolina. Moore is the manager, Walsh works the bar, and Lakpa Bhutia (the charismatic, longtime Maxwell thespian) waits tables with an air of stoic bemusement.

Soon, a pair of musicians (Mendes, Jim Fletcher) arrive, awaiting two others in their party. Settled into the banquette, Fletcher offers Mendes a breath mint. “Cert?” the manly character actor grunts, which is one of the night’s funniest lines. Don’t ask me why.

Younger musicians played by Nicholas Elliott and James Moore roll up. What follows is a drawn-out, meandering colloquy on the genealogy of rock music, from ’70s supergroups (Led Zeppelin, The Eagles) to the punk backlash, then New Wave and the current state of pop. At one point, praise is heaped on the Camper Van Beethoven single “All Her Favorite Fruit,” which this critic heartily approves. (Same for shout-outs to Pete Townsend and Hot Chocolate.) Mendes’s songwriter, who supposedly co-wrote “Sometimes When We Touch,” tells the table, “I want to shut my brain down from telling stories.” Authorial intent?

A great deal more happens across a dozen or so scenes and monologues: spare, elliptical dialogue about social-media burnout, mental health, the Supreme Court’s ruling on abortion, nostalgia, the struggle between hope and despair, worms learning to stand, and the aforementioned epic mime of caveperson screwing and murder. At the climax of that primal (yet comically passionless) choreographed pageant, the petite powerhouse Eleanor Hutchins confronts a female rival (Paige Martin). “We’re a nano-blip,” she describes existence with matter-of-fact ferocity. “There is only pleasure.” Then they fuck. Mid-clinch, Hutchins strangles the other woman and steals her food. Welcome to civilization.

Two and a half hours end with a fuzzy blast of electric guitar backstage, as Bhutia, Moore and Walsh move robotically around the space in repeating patterns. So it goes. World without end. The restaurant at the end of the universe.

If you’re curious but have never seen a Richard Maxwell joint, I’m not gonna lie: His work divides. You could be bored to hell. You might become an instant fan. Personally, I was delighted to see Off-Off veterans Vazquez, Fletcher, Mendes, Bhutia, and Hutchins strut their stuff, let us bask in their radiant, unadorned humanity. The text has a dense, polyphonic power custom-built for them. Field of Mars is an hour longer than most Maxwells, but I admire the extended cosmic ambition, like Thornton Wilder joining a dad punk band. Could be the most stimulating time you’ll have at Applebee’s, minus the Whiskey Bacon Burger. 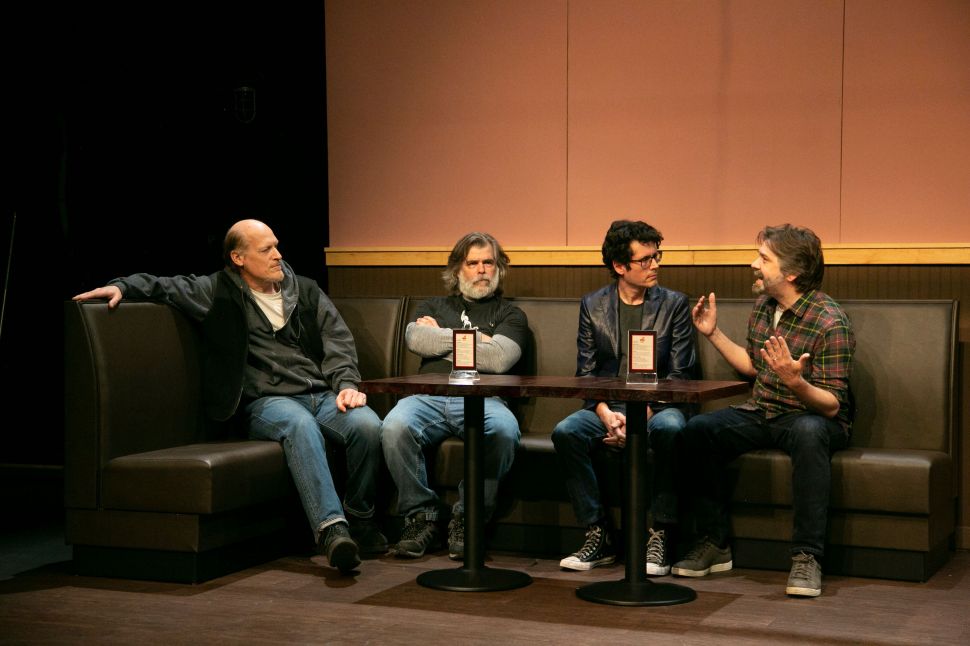