A quick glance at the Metropolitan Opera’s January offerings might suggest the company is all about dying divas. The acclaimed new production of verismo melodrama Fedora alternates with La Traviata, and Poulenc’s French Revolution nun-centric Dialogues des Carmélites opened on January 15th. But amidst all the female anguish, a lovesick tenor took center stage when a joyous revival of Donizetti’s bucolic comedy L’Elisir d’Amore opened on January 10th with Javier Camarena starring as Nemorino, a role he was born to play.

The past few months have been particularly noteworthy for the 46-year-old Mexican singer. In November, Pentatone released Signor Gaetano, his latest solo studio recording, and on December 29 Camarena at very short notice stepped into this season’s final performance of Verdi’s Rigoletto at the Met. When originally scheduled tenor called in sick, General Manager Peter Gelb invited Camarena, who was at the house rehearsing Elisir, to take on the Duke, a role he’d never sung before in the US. After he accepted, the Met swiftly announced the news on social media that afternoon, and I rushed to attend.

Before Rigoletto began, Gelb announced Camarena’s surprise appearance from the stage calling him the Met’s reigning “King of the High Cs,” an obvious reference to the late Luciano Pavarotti with whom Camarena shares a number of roles, including both the Duke and Nemorino. The irony is that neither Rigoletto or Elisir prominently feature that singular high note. But both Pavarotti and Camarena made Tonio in Donizetti’s La Fille du Régiment a signature role, and its first act aria “A mes amis” features nine high Cs. Aria encores were verboten at the Met in Pavarotti’s day, but Camarena has regularly given them there, as during the 2019 run of Fille.

Despite an occasional improvisatory moment, Rigoletto came off wonderfully well. Returning to a role she had last done at the Met a decade ago, Lisette Oropesa as Gilda soared with girlish intensity. Having often sung their roles together at opera houses worldwide, she and Luca Salsi as her father displayed an especially warm and intimate rapport. Otherwise, the gruff Italian baritone tended to bark his high notes toward the Met’s upper balconies rather than his onstage colleagues.

As the licentious Duke, Camarena fit with commendable ease into the complex Rigoletto production. Sometimes he and conductor Speranza Scappucci slipped out of sync but never disastrously so. While he wasn’t ideally ardent in his wooing of Oropesa’s Gilda, by the third act he was lustily manhandling the Maddalena of Aigul Akhmetshina, who had improved markedly since her November debut. If he’d been able to perform the role under normal circumstances, Camarena might have attacked the high D some tenors add at the conclusion of the Duke’s second-act cabaletta, but his vibrant long-held ringing high B that concluded “La donna è mobile” brought rousing cheers from the grateful audience.

Mindful of his previous Met encores, many at Tuesday’s Elisir premiere bravoed loudly after Camarena’s “Una furtiva lagrima,” but no repeat was granted.

Though some may have been disappointed, it was in keeping with the endearing bonhomie that pervaded the performance. Often the opera can seem just a star-turn for the tenor, and Bartlett Sher’s spirited if brutally wrongheaded 2012 production invites Nemorino, the simple villager hopelessly in love with the more prosperous Adina, to beg for the audience’s sympathy. But that sort of greedy pandering made Vittorio Grigolo’s Nemorino nearly intolerable in 2016. Instead, Camarena’s sunny good nature effortlessly won everyone over, including Golda Schultz’s spunky Adina.

Camarena didn’t sound fully free in his opening “Quanto è bella” but soon he warmed up. By the heartbreaking “Adina credemi” in the first-act finale, he was pouring out warmly golden tone. He threw himself into Nemorino’s amusing drunkenness after the gullible guy purchases the faux love elixir from Ambrogio Maestri’s towering shyster of a Dr. Dulcamara. The swindled lad’s amazed amazement when the village’s female population pursued him after learning that he’s inherited a fortune recalled the similar scene in Buster Keaton’s delicious Seven Chances.

The always radiant Schultz, in her first-ever Elisir, proved a delightful partner. Sometimes Adina can come across as brittle and uncaring, but it was clear from the beginning that she was as fond of Nemorino as he was of her. Schultz also made creditable Adina’s exasperation, as well as her rebound flirtation with the Davide Luciano’s strapping Belcore. Following Camerena’s fervent “Una furtiva lagrima” cannot be easy, but her tender and exquisitely floated “Prendi, per me sei libero” might have actually been the evening’s bel canto highlight.

Embracing just the right degree of the strutting sergeant’s macho posturing, Luciano, singing strongly and with unusual élan, positioned Belcore as a serious rival for Adina’s affections. Returning to his role after a decade, Maestri sounded reduced in volume and looked a bit bored with Dulcamara’s antics. He happily refused thought to indulge in hoary buffo schtick while Brittany Renee’s warm Giannetta avoided soubrette clichés.

Young Milanese conductor Michele Gamba sometimes lost control of his crew in his Met debut. He took Donizetti’s fizzy ensembles at such a swift pace that not everyone kept up. Several more rehearsals might have helped, and perhaps Gamba was pooped as he’d flown to his hometown between the dress rehearsal and premiere of Elisir to accompany Markus Werba in Winterreise at La Scala!

Gamba might profitably listen to Camarena’s all-Donizetti Signor Gaetano CD on which Riccardo Frizza (who led the Met’s controversial Lucia di Lammermoor last season which starred the tenor) conducts the period-instrument ensemble Gli Originali with inspiring precision and infectious verve. Recorded in August 2021 at the Teatro Gaetano Donizetti in the composer’s hometown of Bergamo, the recording is a must for Camarena and Donizetti fans.

Pentatone invited not only a chorus but two additional vocal soloists to assist Camarena in exciting excerpts from rarities like Betly and Il giovedì grasso, Maria de Rudenz and Rosmonda d’Inghilterra. Arias from Elisir, Don Pasquale and perhaps Roberto Devereux though will be familiar to many listeners. While his recent Met audiences haven’t been treated to bouquets of high Cs, the recording features many pinging high notes–C and above! Check out, for example, the dizzying heights in the scena from Marino Faliero. While Camarena has struggled in the past with Rossini’s coloratura, he commands Donizetti’s florid writing as well as the composer’s melting cavatinas. The new CD becomes a perfectly timed complement to the Met’s feel-good Elisir which continues through January 27th. 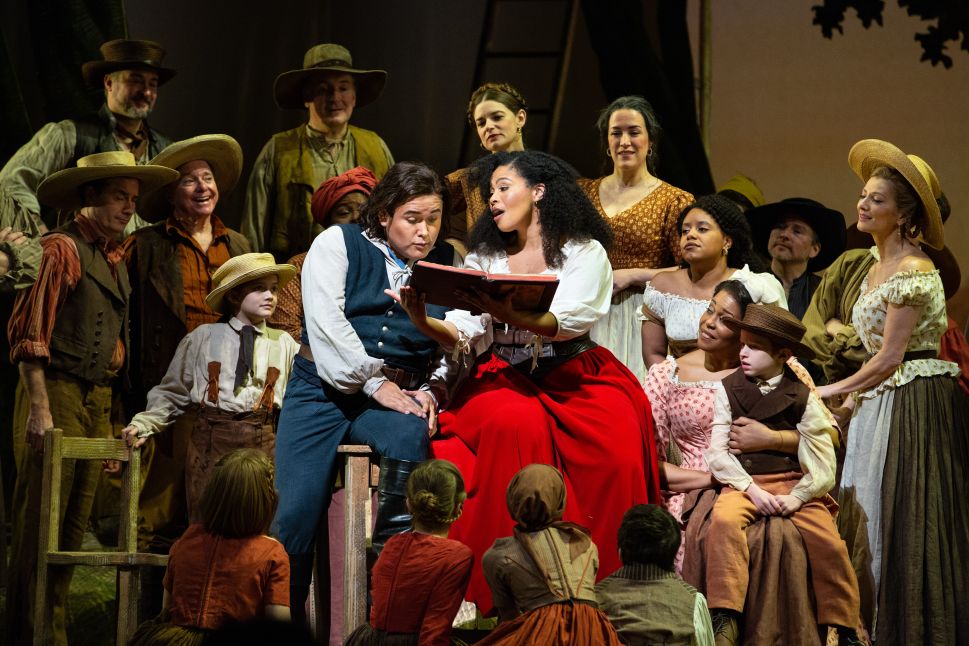