From Tár to Top Gun: Maverick, Elvis to Everything Everywhere All at Once, this year’s batch of Oscar nominees is full of movies big and small. Though many nominated films are still playing in theaters, you can catch plenty from the comfort of your couch. Below are major frontrunners and where you can stream them.

All Quiet on the Western Front

One of the biggest surprises from this year’s nominations came with the German juggernaut, All Quiet on the Western Front. Adapted from the classic novel of the same name, the film takes place at the close of World War I. It follows an idealistic young German soldier as he goes into the trenches, where he finds a war that is darker than the patriotic propaganda he’s been fed at school. It’s a fully realized (anti)war movie, serving as a visual feat as well as a gripping drama. Nominations: 9, including Best Picture and Best Adapted Screenplay. Read our review here.

The Banshees of Inisherin

A small island off the west coast of 20th century Ireland hardly seems like the setting of the year’s sharpest, bleakest, funniest drama, but The Banshees of Inisherin is all that and then some. Colin Farrell and Brendan Gleeson are at their best as a pair of friends who have fallen out, with supporting actors Barry Keoghan and Kerry Condon infusing the movie with humor and heartbreak and humor. Many props go to Jenny the donkey, who surely would’ve been nominated had she been a different species. Nominations: 9, including Best Picture, Best Actor, Best Supporting Actor (x2), and Best Supporting Actress. Read our review here.

Baz Luhrmann had a major return to form this year with his musical megahit, Elvis. This film has everything and the kitchen sink thrown in, tracking Elvis Presley’s many highs, lows, and in-betweens. Austin Butler’s transformation into the late performer is one for the ages, not just nailing the voice but managing to reflect decades of disappointment and desperation with only a few looks. Luhrmann’s rapid-fire style may not be for everyone, but it certainly suits The King — and Academy voters. Nominations: 8, including Best Picture and Best Actor. Read our review here.

From Avatar to Top Gun to Black Panther, the Academy has really embraced the blockbuster this year. Of course, between The Dark Knight and Joker, The Batman is hardly the first Batman property to get such esteemed recognition. Not only has the film garnered its fair share of nominations for its technical prowess, but it boasts several marquee names — some even represented in this year’s nominees! Between Paul Dano (The Fabelmans) and Colin Farrell (The Banshees of Inisherin), the villains of The Batman had a pretty impressive 2022. Nominations: 3, including Best Visual Effects. Read our review here.

What to watch on Peacock

If Tár proved anything, it’s that Cate Blanchett may just be the most watchable actor ever to grace the silver screen. Whether waxing poetic about niche composers or threatening a schoolyard bully, Blanchett’s revelatory performance as composer and conductor Lydia Tár. The film defies neat definition, acting both as a meditation on cancel culture surrounding a lesbian in a male-dominated field and as a fascinating, highly individual character study. It’s a strange but compelling movie, with a final scene that’ll make your jaw drop. Nominations: 6, including Best Picture, Best Director, and Best Actress. Read our review here.

What to watch on Paramount Plus

Everything Everywhere All at Once

A film brave enough to ask if “Chekhov’s gun” could be turned into “Chekhov’s butt-plug,” Everything Everywhere All at Once is no longer making a splash this awards season — it’s cannonballing straight in. A dramedy about intergenerational tensions, multiverses, and IRS audits, Everything Everywhere is a masterclass in originality and a genre-bending delight. Both Michelle Yeoh and Ke Huy Quan get to show off their considerable stunt talents before delivering some of the year’s best dramatic scenes, while Jamie Lee Curtis and Stephanie Hsu add some of the film’s more absurd layers. Nominations: 11, including Best Picture, Best Director(s), Best Actress, and Best Supporting Actor. Read our review here.

Tom Cruise still has it. Who would’ve thought that a sequel to Top Gun (made over thirty-five years later) would be such a roaring success in the hallowed halls of the Academy? Top Gun: Maverick brought action to the big screen like few other films ever have. Of course, the movie built on a great story at its center, bringing Cruise’s Maverick back into the fold while still honoring where he started. Plus, it’s got a score by Lady Gaga — what else could anyone want? Nominations: 6, including Best Picture and Best Adapted Screenplay. Read our review here.

Much like its predecessor, Black Panther: Wakanda Forever has made quite the superhero stand throughout awards season. The smash hit sequel had a difficult hill to climb, what with the unfortunate passing of its lead, Chadwick Boseman, but it brought a new Black Panther alongside a heartfelt, sometimes heart wrenching, story. Action-packed, emotionally-charged, and a refreshing addition to the ever-expanding Marvel Cinematic Universe, the film boasts the talents of Angela Bassett, Letitia Wright, Lupita Nyong’o, and even the long-awaited musical return of Rihanna. Nominations: 5, including Best Supporting Actress. Read our review here. 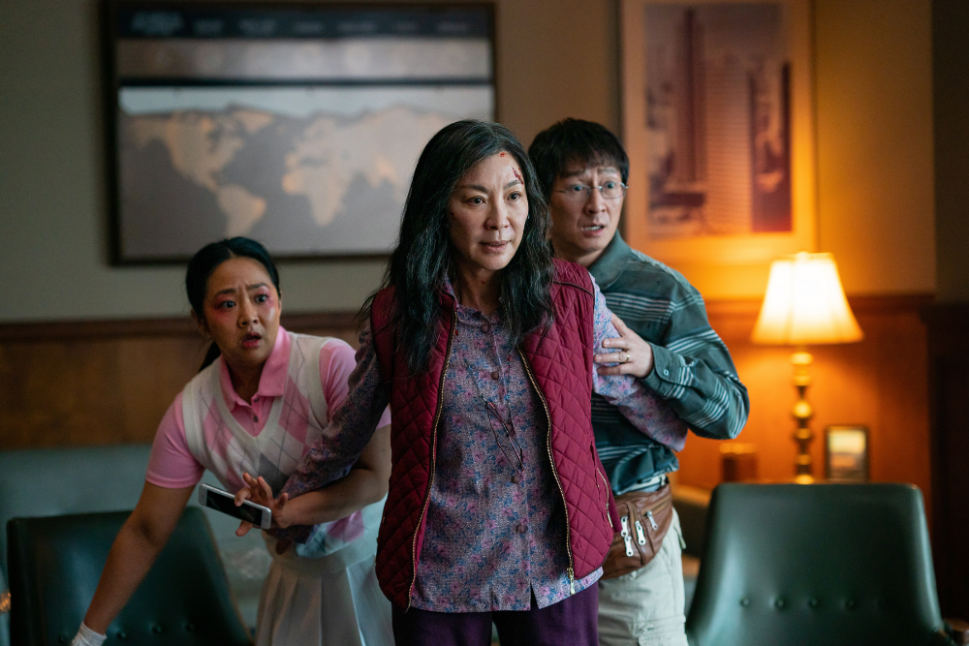