Pride is packed with official and not so official celebrations of queer culture and life, here is our art-focused events guide for June. 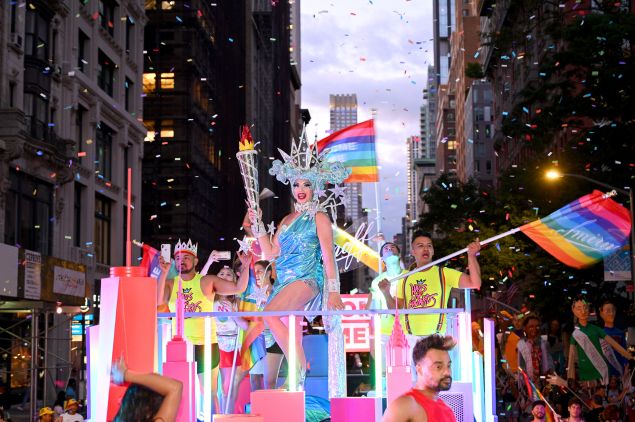 June is Pride Month which means New York City is going to be a month-long celebration of queer culture and life! Events every day, it’s important to remember how lucky we are to live in a city where queer people can comfortably celebrate our lives! Here’s to that! Of course, there are the official events but there’s a lot just going around the city this month that’s worth checking out.

Screening of Cult Classic ‘But I’m a Cheerleader’

Directed by Jamie Babbitt, this queer canon film from 2000 is showing at the Museum of the Moving Image in Astoria on June 4 at 6 pm. It’s honestly such a perfect date-night movie but general content warning for its conversion therapy-driven plot. Starring somehow straight Natasha Lyonne, RuPaul, the elegant Clea Duvall, Michelle Williams, and an early Melanie Lynskey, it’s a star-studded cast.

Of course, for the celebratory-inclined you cannot forget the a billion sponsored events such as the March itself, the street fair PrideFest, and even a Youth Pride all taking place throughout the city. The March and Pridefest both unfold on June 26, while the youth-focused Pride is on June 25. And that’s barely touching the vast array of events available.

Actor, writer, and co-creator of the hit show Los Espookys Julio Torres will be in conversation with actor, writer, and Las Culturistas podcaster Bowen Yang. The event will be available to watch both online and in person at Kaufmann Concert Hall. Discussing their longterm friendship and careers, this would be a favorite for any fan.

Beyond excited for this Tennessee Williams focus at Out of the Box Theatre Company this June, with several performances from June 9 to the 19 of Williams’ little-seen one acts. Staged at the Bernie Wohl Center and directed by Ward Nixon, this is a chance to appreciate the genius of one of our favorite queer icons.

The Latvian-British artist Kristaps Ancāns’s Polar Rainbow is showing in Times Square for the entire month of June. Curated by Corina L. Apostol, the work brings a virtual rainbow above Times Square using an easily downloadable app. Truly the intersection of queers and technology.

Until June 25 the artist Chloe Chiasson will be showing at albertz benda gallery. The exhibition “Fast Hearts and Slow Towns” is the artist’s first solo show yet is a stunning exploration of queer life which shows promising potential.

Pride in the Park

On June 17 the New York City Opera will present its annual Pride in the Park performance, free to the public and held at Bryant Park at 7pm, it’s a much loved favorite. Featuring a diverse array of performances from old favorites, it’s a unique day at the park for sure.

Gender Discard Party with Nayland Blake at the Whitney

The gender discard party hosted by Nayland Blake at the Whitney Museum of American Art invites attendees to “B.Y.O.B: Bring Your Own Baggage.” Attendance is free with registration on June 9 from 7pm to 10pm, with dancing, food, and drinks. It’s 21+.