The Ultimate List of Books by Sun Valley Conference 2022 Attendees 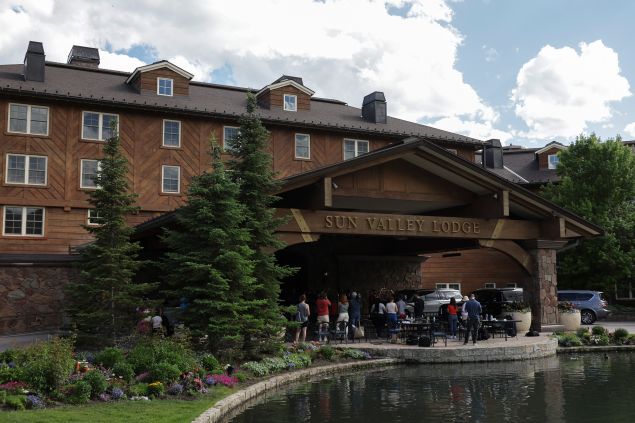 Every year eyes watch as the most powerful, wealthy, and connected sojourn to Sun Valley, Idaho. Why Sun Valley, Idaho? It just so happens to be the home of the private investment firm Allen & Company. If you’re unfamiliar with Allen & Company yet have heard of companies such as Google, InterActiveCorp, the Coca-Cola Corporation, or Discovery Communications among others, well you’ve heard of Allen & Company. What’s fun about the majority of the attendees, outside of notable exceptions such as Governor Bob Little, is that they are authors! From a wide-range of advice books, memoirs, success guides, to speculative science fiction, there’s a truly impressive sweep of a library here.

Sara Blakely, the CEO of Spanx has written The Belly Art Project, showcasing moms-to-be with their bellies transformed into works of art, with 100% of the author’s proceeds benefiting Every Mother Counts. Thank you Sara for the belly art and for making formal outfits look smooth.

Tom Brokaw has written a boatload of books, all of which can be seen here, but he’s most notable for The Greatest Generation, a series of profiles of Americans during WWII.

A collection of writings from Warren Buffett to shareholders of Berkshire Hathaway, co-authored with Lawrence Cunningham, The Essays of Warren Buffett: Lessons for Corporate America is likely the most direct instruction for aspirational billionaires out there – Buffett isn’t known for investing poorly.

Stewart Butterfield has not actually written a book himself, but when you look him up, he is nearly constantly talking about Leadership and Self-Deception: Getting Out of the Box by the Arbinger Institute as his number one book anyone in business should read. Given this article was edited partially via Slack, he might have a point.

Tim Cook has not actually written any books himself, but given Tim’s visibility in business and tech, there’s a definitive biography of the man who inherited Steve Job’s crown. Tim Cook: The Genius Who Took Apple to the Next Level by Leander Kahney certainly was apt in titling.

Anderson Cooper is a busy guy, being the primary anchor of the CNN news broadcast show Anderson Cooper 360° while serving as a correspondent for 60 Minutes on CBS News. He’s written three books, despite his busy schedule. Vanderbilt: The Rise and Fall of an American Dynasty, which he co-authored with Katherine Howe, chronicles the rise and fall of his mother’s family, the Vanderbilts.

the rise and fall of the vanderbilts

Gianrico Farrugia, Mayo Clinic CEO. Gianrico Farriugia co-authored Think Big, Start Small, Move Fast: A Blueprint for Transformation from the Mayo Clinic Center for Innovation alongside Nicholas LaRusso and Barbara Spurrier, an innovation guide based on the proven, decade-long program that’s made the Mayo Clinic one of the most respected organizations in the world.

a blueprint for transformation

A man comfortable with writing a book claiming to portray a brief history of the 21st Century titled The World is Flat, Thomas Friedman is most known for his New York Times column where he frequently references McDonalds, and for winning the Pulitzer Prize three times.

Bill Gates has written four books! Other than founding Microsoft and trying to keep his seemingly messy divorce quiet, Gates prefers to focus on slowing climate change, with 2021’s How to Avoid a Climate Disaster: The Solutions We Have and the Breakthroughs We Need outlining how Gates hopes we can save the planet.

how to avoid climate disaster

Brian Grazer is the Co-founder of Imagine Entertainment, alongside filmmaker Ron Howard, and is the Academy Award-winning producer of A Beautiful Mind, Apollo 13, Splash, Arrested Development, 24, 8 Mile and more. He’s written two books, co-authoring A Curious Mind: The Secret to a Bigger Life with Charles Fishman, showing how curiosity has been the “secret” that fueled his rise in Hollywood.

brian grazer is an author

As President of the Council on Foreign Relations, one expects a certain level of academic stature and Richard Haass refuses to disappoint. He has authored several books, all exploring issues within international relations, the art of persuasion, and entrepreneurship. His book The World: A Brief Introduction earned him a spot on the New York Times bestseller list.

It’s clear that the CEO of Netflix Reed Hastings envisions himself as something of a visionary, and certainly he has his eyes on something. His book No Rules Rules: Netflix and the Culture of Reinvention, co-written with business writer Erin Meyer, sells itself as something of a tell-all into the “unorthodox” workplace and strategy that has led to its success. Of course, one might wonder what a version in 2025 will have to say.

netflix and the culture of reinvention

It turns out Washington Post columnist David Ignatius is also an incredibly prolific fiction author. Author of books such as The Quantum Spy, Body of Lies, Blood Money, and more, it’s clear to see that one medium just isn’t enough for some writers.

For those either obsessed with entering the entertainment industry or just with the Disney Company in general, former CEO Robert Iger’s The Ride of a Lifetime: Lessons Learned from 15 Years as CEO of the Walt Disney Company might be perfect for you. Fifteen years at the helm of arguably the most powerful entertainment company and a book is a pretty good trade for over a decade of your life.

ride of a lifetime

Host of a show named after himself, Emmy-award winning news and political commentator Van Jones has written several books. His most recent, and most popular, book Beyond the Messy Truth: How We Came Apart, How We Come Together dealt with bridging gaps in the political aisle. It makes sense he would fit in among prestigious company.

the messy truth in print

In an endearing turn of events Nike founder Phil Knight named his memoir Shoe Dog, which is exactly his whole deal. Fans of the beloved shoe brand will want to know more about the man behind their favorite kicks.

shoe dog because of course

Billionaire John Malone isn’t an author yet collaborated heavily with journalist Mark Robichaux on Cable Cowboy: John Malone and the Rise of the Modern Cable Business, which is the closest thing to an official biography one is going to get. Which to be honest, is a bit cowboy.

The Deputy Commissioner of Intelligence and Counterterrorism for the NYPD, not surprisedly, wrote a book on the 9/11 attacks called The Cell: Inside the 9/11 Plot, and Why the FBI and CIA Failed to Stop It. What’s most interesting is the book was published before the events had even reached their one year anniversary, on September 1 2002.

Former CIA Chief Michael Morell supposedly was by President Bush’s side during the events of 9/11, as well as intimately serving several presidents, so it makes sense he has a lot to say about the threats that he personally feels face the United States. His book The Great War of Our Time: The CIA’s Fight Against Terrorism–From al Qa’ida to ISIS speaks to this focus and belief.

the cia’s fight against terrorism

An interesting attendee, Anne Moss Rogers is a suicide prevention specialist who made a name for herself through her Ted Talk “Can A Blog Save Lives?” based on her blog Emotionally Naked. Her book Diary of a Broken Mind: A Mother’s Story, a Son’s Suicide, and the Haunting Lyrics He Left Behind, follows her heartbreaking story of losing her own son to suicide.

Diary of a broken mind

Conservative political commentator Douglas Murray is feeling right at home at the Sun Valley Conference, despite spending most of his time doing public speaking and publishing work such as The War on the West, among others.

Of course in attendance this weekend is the notorious, if not respected despite his antics, Tesla founder Elon Musk. Amidst threats to buy Twitter, fathering many children, dreams of creating self-driving cars, and the clear desire for Mars colonization, Musk previously stated in 2015 he would write a book. We’d love to include a book by him sometime, if there was one.

You might be wondering who exactly is Mike Ovitz despite the face he founded the Creative Artists Agency and briefly served as the President of The Walt Disney Company from 1995 to 1997. Don’t worry though, Ovitz has you covered with his memoir Who Is Michael Ovitz?, which to say the least is to the point.

who is Mike ovitz?

Well-respected General Petraeus has had a prolific career in public service, the military, and government, it only makes sense he would write a book asking for a refocus on North America in US domestic policy. His book North America: Time for a New Focus is more a report yet die-hard fans will want to read.

New York Times columnist and co-host of CNBC’s Squawk Box is responsible for the optimistically named Too Big to Fail: The Inside Story of How Wall Street and Washington Fought to Save the Financial System–and Themselves. For one wanting to dive into a political understanding of the United States before 2018 (when the book was published), this is a great example of Ross Sorkin’s work.

Too big to fail

Facebook’s outgoing COO Sheryl Sandberg certainly had some free time while heading operations at the most powerful social media platform, as she wrote several books. The author and COO is responsible for the paperback Lean In: Women, Work, and the Will to Lead. She then co-authored two books with psychologist Adam Grant of a similar pop-psychology nature, Originals: How Non-Conformists Move the World and Option B: Facing Adversity, Building Resilience, and Finding Joy.

Household name and broadcast journalist Diane Sawyer is also attending this week, and even though not technically an author she did have a direct impact on a significant book: Richard Nixon’s memoirs. Having worked as a press aide during the Nixon administration, Sawyer worked so directly with the former president that she earned a spot on this list.

Entrepreneur and venture capitalist Peter Thiel likes to think of himself as a man of great influence, and his career choices speak to this. It’s not shocking that he wrote two books yet he certainly didn’t stick to any one beat. One book, which we link here, Zero to One: Notes on Startups, or How to Build the Future, most certainly influenced any young gun with start-up dreams. His other book from 1998, The Diversity Myth : Multiculturalism and Political Intolerance on Campus, was co-written by entrepreneur David O’Sacks.

With a plethora of companies under her belt, it’s shocking that Meg Whitman even had time to write her book, The Power of Many: Values for Success in Business and in Life, yet she did! Whitman offers 10 core strategies for not just business success yet personal too.

the power of many

It’s no surprise that the president of as prestigious an institution as the University of Chicago is an author, several times over. Before his time in university administration, Zimmer primarily worked as a mathematician and wrote books such as Ergodic Theory and Semisimple Groups, or Essential Results of Functional Analysis. For the math-minded, diving into Zimmer’s work would be delightful.

Author is not something Mark Zuckerberg can list under his accomplishments; however, based on an uber watched viral video there might be a serious demand for a BBQ cookbook.