The Luxurious Hotels to Book for the Venice Film Festival

Check into one of these plush spots for your next Venetian adventure. 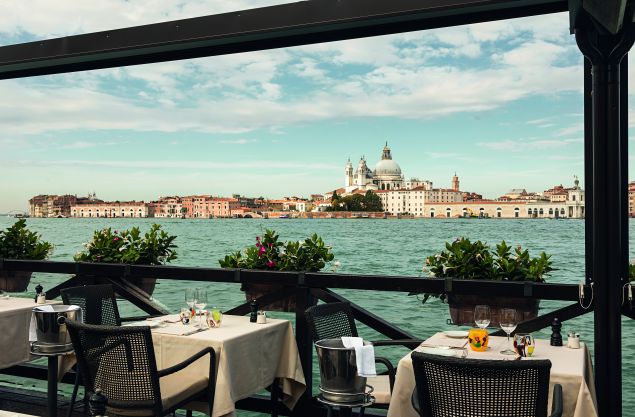 The glamorous Gritti Palace is perched right above the Grand Canal, with Insta-worthy views of the water from every single one of the 82 rooms and suites. The historic hotel is an old school classic that dates back to the 15th century, when it was used as a private residence, before it was subsequently transformed into a luxury hotel in the 19th century. In the years since, the plush hotel has welcomed guests including Elizabeth Taylor, Richard Burton, Grace Kelly, Angelina Jolie and Brad Pitt. Ernest Hemingway was so taken with the hotel that he took up residence in one of the rooms (the Presidential Suite is now named after the famed writer). There are three different dining options, as well as access to the Gritti Palace Epicurean School, where those interested can partake in a full local culinary experience, complete with demos, classes and a visit to the Venetian markets. If you want to explore Venice, opt into the hotel’s Riva Yacht Experience, and for the ultimate pampering moment, make sure to book a treatment at the Sisley Spa.

You can’t go wrong with the iconic Hotel Cipriani, which is surely one of the most famous spots in the entire city. It’s also one of the most private hotels, at least when it comes to location, since it’s situated on Guidecca Island, and is reachable by private motorboat. You won’t be stranded from the rest of the festivities, though, as the 96-room hotel has its own exclusive dock near Piazza San Marco. Past guests include Princess Diana, Anne Hathaway and Steven Spielberg, as well as George and Amal Clooney. Even if you’re not a guest at the hotel, you can’t go to Venice without stopping for a Bellini at Cip’s Club or Bar Gabbiano, and taking a dip in the hotel’s ridiculously instagrammable pool. If you want to indulge in a Michelin-star dining experience, check out the 41-seat Ristorante Oro, where former Noma chef Riccardo Canella is now in charge.

The Baglioni Hotel Luna is actually the oldest hotel in Venice; it dates back to the 12th century, and reportedly once housed the Knights Templar. The 91-room hotel just reopened its doors in March 2022 after a major renovation courtesy of design firm Spagnulo & Partners, revealing a brand-new spa and modern updates like fresh marble flooring and sparkling chandeliers. There are still plenty of original details, too, like ornate stucco walls and an 18th century fresco on the ceiling of the Marco Polo ballroom. Along with the spa, the hotel, a member of LHW, also debuted a new restaurant, Canova by Sadler, in May.

The St. Regis is situated just a minute away from the Gritti Palace, in a similar location on the Grand Canal. The St. Regis is actually a combination of five different 18th and 19th century palazzi, which have been seamlessly blended into one palatial hotel that is now composed of 169 rooms, including 40 suites. The interiors are designed by Sagrada, including custom features like restored terrazzo floors and crown moldings. There are no less than four terraces on the ground floor, and for dining, make a reservation at Gio’s Restaurant & Garden (it has prime views) and get a cocktail at one of the two bars. And, of course, there’s the Iridium Spa.

If you want a more contemporary hotel option in Venice, consider Ca’ di Dio. While parts of the building date back to the 13th century, it’s now a decidedly modern hotel, which opened its doors just last year, showcasing the results of a three-year renovation and redesign courtesy of Spanish architect and designer Patricia Urquiola. The five-star spot, a member of Small Luxury Hotels of the World, is located right as you arrive at the Arsenale district, where the Art Biennale is held. The 66 rooms are spread out over three levels, and all feature an Italian-inspired design, with local fabrics and marble-bedecked bathrooms. There are two main restaurants; Vero is perched above the lagoon, while Essentia is tucked into the internal courtyard.