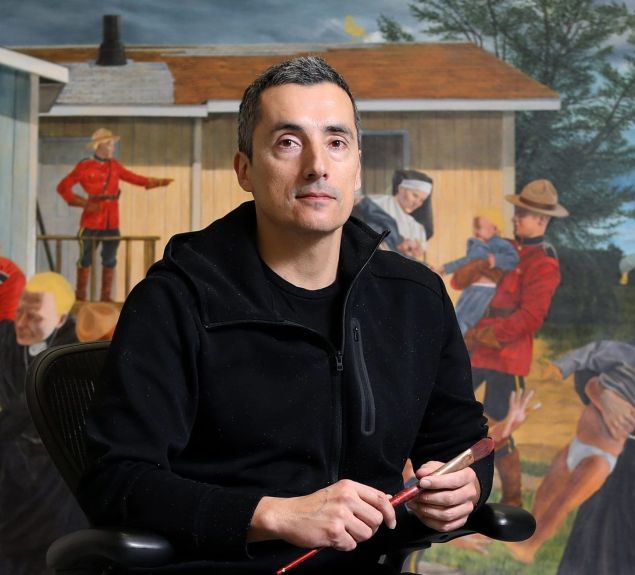 Few artists have been responsible for instigating the type of debate that Kent Monkman has throughout his career. The painter, who is of Cree First Nations heritage, uses the image-making language of the Old Masters “as a way to tell stories,” as he told Observer in an interview last year. “Relating indigenous experience through this very complicated language of image making has so much value,” he said.

Often depicting the gender-fluid, supernatural alter ego he calls Miss Chief Eagle Testickle as a central figure, Monkman’s work comments on the violence of colonial history, particularly within Canada, often graphically depicting subverted or metaphorical scenes to illustrate the horror wrought on indigenous peoples. Part of his 2019 commission for the Metropolitan Museum’s Great Hall, for example, copied the form of Washington Crossing the Delaware to portray indigenous people in an overcrowded wooden boat rescuing those drowning in choppy, polluted waters with the ominous presence of armed white nationalists gesticulating in the distance.

The Met commission was well received, with critics commenting on Monkman’s deft ability to transform a viewer’s experience of the hallowed institution by drawing on art historical references to cast the collection in a more honest light. But this year, some felt Monkman had gone too far in a work in which he painted Canadian Prime Minister Justin Trudeau engaged in a sexual act that lacked unambiguous consent, while surrounded by laughing indigenous women. Monkman apologized after an uproar that involved both indigenous and women’s rights activists speaking out to criticize as well as support the work.